CERO: A
ESRB: E
Disney Stitch Jam, known in Japan as Stitch! DS: Ohana to Rhythm de Daibouken (スティッチ！DS オハナとリズムで大冒険?, Stitch! DS: A Great Adventure of Ohana and Rhythm), is a music/rhythm video game and the first video game in the Stitch! series. It was released in Japan on December 3, 2009, and in North America on March 23, 2010. The Japanese version came out with a re-release on July 28, 2011 as part of Disney Celebration Series.

Different from past Lilo & Stitch adaptations, Disney Stitch Jam is a rhythm game. Players can take control of Stitch and friends in variety of missions set in space, out on the seas, and in a variety of areas by touching the notes and exclamation marks. The story happened when Angel was kidnapped by Gantu and Hämsterviel. Stitch has to rescue her by travelling into 10 worlds. Stitch is the main playable character. Angel, Reuben, and Felix are unlocked after completing the main story. 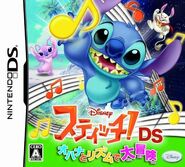 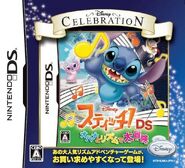