The couple died in a car accident sometime before the events of Lilo & Stitch (though Lilo implied that rain made road conditions treacherous), and they have not appeared in the franchise apart from three photographs: one of Lilo, Nani, and their parents having a picnic on the beach from the film; another photo of Lilo's mother winning the hula school's May Day celebration in 1973 in Lilo & Stitch 2: Stitch Has a Glitch (when she was Lilo's age); and a third photo of Nani with her parents when she graduated to intermediate hula in the episode "Wishy-Washy".

Lilo's mother is depicted as kind and loving (and perhaps eccentric like her younger daughter), as well as an excellent hula dancer in her youth. She would placate her children by holding a family night, singing lullabies, and making up funny constellations. Lilo's father played the ukulele and was the one who coined the phrase: "ʻOhana means family, and family means nobody gets left behind or forgotten." The phrase becomes a sort of family motto for his daughters and their intergalactic adopted clan. The couple's passing left a persistent sense of regret on their daughters; Lilo keeps the first photograph under her pillow as a close memento of the times they had together. Initially, she would not allow Stitch to touch it and even reject his attempts to return it when Stitch's fight with Jumba causes her house and the picture to become damaged. After his integration into the Pelekai family, the photo is modified with Stitch in the background to signify the family altogether.

Aside from the photographs, the only time the couple physically "appear" is in The Series episode "Remmy", which takes place on the anniversary of the accident. In Lilo's dream, the family photograph is used to turn Lilo's nightmares into a dream of the day the photograph was taken, which manages to make her happy again. This also temporarily brings her parents back as they play together in the dream.

Lilo's mom when she was younger in Lilo & Stitch 2: Stitch Has a Glitch. 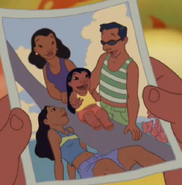 The photo as it appears in Lilo & Stitch: The Series, oddly unscathed and without Mr. Pelekai playing the ukulele.

The Pelekais "appearing" in Lilo's dream in "Remmy". 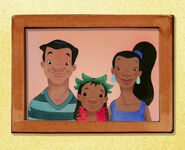 Mr. and Mrs. Pelekai with a young Nani in her graduation photo in "Wishy-Washy".