He is designed to crush precious orbs of nearly indestructible Uburnium to useless pulp.

Mashy, A.K.A. Experiment 225, is an illegal genetic experiment created by Jumba Jookiba and a character in the Lilo & Stitch franchise. He is designed to crush precious orbs of nearly indestructible Uburnium to useless pulp. He does what Clip was intended to be designed to do: consume Uburnium to cause a fuel crisis.

Experiment 225 was the 225th genetic experiment created by Jumba with Hämsterviel's funding. He was designed to crush orbs of precious Uburnium in his mouth. 225 and the other first 624 experiments were deactivated and smuggled to Earth by Jumba during his mission to capture Experiment 626.

At some point, 225 was presumably activated, captured, and named Mashy.

The first 624 experiments, including Mashy, were rounded up by Leroy and taken to a stadium to be destroyed. However, Lilo, Stitch, Jumba, Pleakley, Reuben and Gantu arrived before the experiments could be destroyed.

Mashy participated in the following battle between the experiments and the Leroy clones.

The Leroys soon gained the upper hand in the battle, but were defeated when Lilo, Stitch, Reuben and several other experiments performed the song "Aloha ʻOe", which caused the Leroy army to shut down due to the original Leroy's fail-safe.

Mashy is a light blue dinosaur-like experiment, with a huge mouth, with tiny horns above each nostril, two large ears and a large body.

Mashy can crush orbs of Uburnium with his enormous mouth. 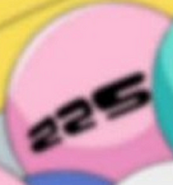 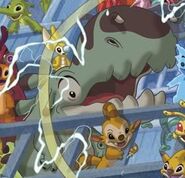 Mashy with Kingpin on his back

Add a photo to this gallery
Retrieved from "https://liloandstitch.fandom.com/wiki/Mashy_(225)?oldid=171649"
Community content is available under CC-BY-SA unless otherwise noted.