Jumba's ship is a spacecraft that Jumba Jookiba uses for personal transport.

In Lilo & Stitch, Jumba drives this ship with his partner (later, best friend and roommate) Pleakley during their mission to capture Experiment 626. During the climax when Lilo is accidentally kidnapped by Gantu, Stitch uses Jumba's ship to follow Gantu's ship at the mountains and volcanoes and manages to save Lilo. This ship remains on Earth when Jumba and Pleakley become stranded, and are both forbidden to go back to their home planets under the orders of the Grand Councilwoman.

In Lilo & Stitch 2: Stitch Has a Glitch, Stitch unintentionally scratches Lilo's face when she went near him to see what was wrong, unaware of his glitch. Believing he is a danger to Lilo, Stitch runs away and hijacks Jumba's ship. While taking off, Stitch has another outburst, which causes him to crash the spaceship in the Hawaiian mountains.

In Stitch! The Movie, after Jumba is kidnapped by Gantu, Lilo and Stitch drive Jumba's ship to chase Gantu into outer space and engage him in battle, before being defeated and falling back towards Earth.

Jumba's ship is later seen in many episodes of Lilo & Stitch: The Series. In "The Asteroid", Lilo, Stitch, Jumba, Pleakley, and a few of Stitch's cousins drive this ship into outer space to destroy an approaching asteroid to save Earth. However, when they arrive to discover that the asteroid is home to an alien squatter, they ultimately use the ship's hyperdrive engine to safely divert the asteroid without destroying it. In "627", it is revealed that Jumba has another lab inside of his ship for doing more private scientific work, especially creating new genetic experiments like 627 and 628. In "Shoe", this ship is turned into "Jumba & Pleakley's Bed & Not Breakfast" hotel with the help of Stitch and several other experiments. In "Bugby", Jumba tries to reinstall every lab equipment on his ship after he, Lilo, Stitch, and Pleakley were turned into insects by Bugby in order to turn them back to normal.

In Leroy & Stitch, after Lilo and Stitch had successfully captured all 625 of Jumba's genetic experiments and turned them from bad to good, Jumba and Pleakley were finally allowed to go back to their home planets, and Stitch was given a new job as captain of the B.R.B. 9000. At first, the three choose to stay with Lilo, so as not to hurt her feelings, but she ends up letting them go. Before they drive away in Jumba's ship, Lilo gives them each a present: an Elvis record for Jumba, a rock for Pleakley, and a tiki necklace for Stitch. However, the three eventually become homesick, and in the end, they drive back to Earth to become part of Lilo's ʻohana once again.

Jumba's ship appears once in Stitch! anime, when Stitch leaves Earth after thinking Lilo abandoned him.

The spaceship was actually created late in development due to the September 11, 2001 terrorist attack incident. Originally, when Gantu accidentally captures Lilo near the end of the film, and Stitch manages to escape to warn Jumba, Pleakley and Nani about Lilo's kidnapping, the four were actually going to hijack a 747 passenger jet flying for Tsunami Airlines at Lihue Airport and use it to chase Gantu down the city of Honolulu, the capital of Hawaii, destroying many skyscrapers in the process. However, since the Twin Towers of the World Trade Center in New York City, NY were both destroyed on 9/11 by hijacked airplanes that day, the entire scene had to be reanimated so that the airplane would be replace with Jumba's own ship (it's extremely noticeable judging by the shape of the doors and the overall fuselage), and the city of Honolulu was replaced by the mountains of the Big Island of Hawaii (leading to Stitch managing to catch up with Gantu by launching himself out of a volcano). A similar treatment was done to the scene where Jumba and Pleakley raid the Pelekai residence to capture Stitch only to end up accidentally having the house burned down in the process.

Another reason for the creation of this vehicle is to also resolve a potential plot hole likely created by the above in order to show how exactly Jumba and Pleakley made it to Earth in the first place.

Lilo & Stitch 2: Stitch Has a Glitch 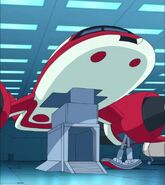 Add a photo to this gallery
Retrieved from "https://liloandstitch.fandom.com/wiki/Jumba%27s_Ship?oldid=174833"
Community content is available under CC-BY-SA unless otherwise noted.