To turn things into chocolate

With Lilo as her birthday present

Turns objects into chocolate upon touching them

Coco, A.K.A. Experiment 052, is an illegal genetic experiment created by Jumba Jookiba and a character in the Lilo & Stitch franchise. He is designed to turn things into chocolate. Stitch gifted Coco to Lilo as a birthday present in the Disney Adventures comic Party Crashers.

Experiment 052 was the 52nd genetic experiment created by Jumba with Hämsterviel's funding. He was designed to turn objects into chocolate. 052 and the other first 624 experiments were deactivated and smuggled to Earth by Jumba during his mission to capture Experiment 626.

Stitch chased Coco throughout the house on Lilo's birthday, wrecking everything. At first, Lilo was angry with Stitch for ruining her birthday, but Stitch showed her 052's power of turning objects into chocolate. Lilo changes her mind and declares it to be her best birthday ever instead, while she, Stitch, and everyone else enjoys eating the chocolate-converted household objects. 052 was then named Coco.

Coco is a lizard/Stitch-like experiment with light brown hide and a yellow underbelly, two buckteeth, a pink nose, pink spots down his back and tail, and pink hair on his head with chocolate-brown tips.

Coco can turn things into chocolate by touching them, though the object will remain the same color. 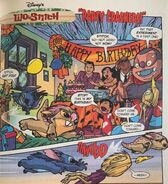 Part of the comic featuring Coco 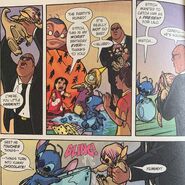 Part of the comic featuring Coco and his function
Add a photo to this gallery
Retrieved from "https://liloandstitch.fandom.com/wiki/Coco_(052)?oldid=173348"
Community content is available under CC-BY-SA unless otherwise noted.