Cobra Bubbles is a major character from the Lilo & Stitch franchise. He is a former CIA agent who became a social worker by the time of the original film.

Cobra Bubbles is a tough man. Despite having initially been an antagonist of Lilo and Stitch, he is by no means evil. As a social worker, he wanted to ensure Lilo, who had lost her parents, could be properly taken care of by Nani since she was also fairly young herself, despite being legally considered an adult. He is calm and is not one to show emotions, making it hard for others to read what he is thinking. He may be the type to hold grudges, as when Nani kicked his car in anger and he formally met her, he referred to himself as "the Stupidhead", which Nani called him after kicking his car, unaware that he was the social worker. He is strong, as shown when he pulled open the door that Lilo nailed shut. He is also fairly serious, not taking jokes well and remaining focused on his objective at hand, possibly influenced from his previous line of work as a CIA agent. He is stubborn as he stood firm on his decision that Nani was not capable of raising Lilo due to her temper and lack of maturity and does not let his emotions get in the way of his work, as he seemed saddened at the prospect of having to take Lilo away from Nani but believed this was the best thing for Lilo.

He initially did not believe Nani could take care of Lilo, but was still understanding enough to give her three days to change his mind and told her to find a job if she could convince him otherwise, showing he is patient. When he saw Lilo nearly drowning, he stood firm on his decision to take Lilo away, especially after he saw their house blow up. He seems to be tender to children, as he was worried for Lilo and carried her in his arm before carefully putting her in his car. Despite his strict nature, he is capable of change as he accepted what Lilo wanted and needed to be with her ohana and shouldn't be taken away and is capable of being happy and having fun as shown when he went to Lilo's birthday party at the end of the first movie and in the episode "Amnesio".

He will also show gratitude to those he feels earns his respect, as shown through his exchange with Lilo and Stitch. He also seems to have a temper, as he (reasonably) got mad at Stitch after Stitch threw a book at his head, but quickly collected himself. This may imply that he has a temper but simply knows how to control it. This is further proven as he enters a heated argument of Nani over who should have custody of Lilo.

Not much is known about his background other than the fact that he previously worked for the CIA before ultimately becoming a social worker by the time the movie started. However, he seems to still keep these connections. He has also stated that he once convinced an alien race that mosquitoes were an endangered species, implied to be Pleakley's alien race. The Grand Councilwoman also states he had hair in the past, which was why she didn't initially recognize him. He also mentioned CIA Roswell 1973 when talking to the Grand Councilwoman, implying he was involved with the incident.

Cobra Bubbles is called to Nani's house to determine the fate of her guardianship over her sister Lilo, only to find Lilo home alone, the front door nailed shut and Nani trying to get in via the dog door. After a brief assessment, during which Lilo misinterprets Nani's hand signals (probably on purpose), Cobra concludes that Nani is not doing a good enough job.

When Nani is fired from her job at a luau because of Stitch's violent behavior, he tells her that he cannot ignore her being unemployed and gives her three days to find a new job. Cobra's subsequent encounter with the family's new "dog", Stitch, also proves to be less than favorable (upon meeting him, Stitch promptly throws a dictionary at Cobra's head), prompting Cobra to tell Lilo to turn Stitch into a model citizen.

After Cobra sees Lilo nearly drown when surfing with Nani, David and Stitch, he decides to take Lilo away the next morning, though he is sad about it (it can be assumed that he saw her drown and blames Nani for her near-death). When Jumba and Pleakley forcibly enter the house to capture Stitch, Lilo phones Cobra and proclaims that "aliens are attacking my house." After the house is destroyed by Jumba's questionable tactics, Cobra arrives to take Lilo away, presumably to a foster home. However, Lilo runs off and is subsequently captured by Gantu.

At the end of the film, Cobra is revealed to be a former CIA agent and was involved in an incident at Roswell in 1973, presumably through which he knows the Grand Councilwoman. He mentions that he saved the earth from an alien race by convincing them that the mosquito was an endangered species and that Earth should be turned into a wildlife preserve. (Therefore, based on Pleakley's words, it can be further assumed that it was Pleakley's race he was trying to convince.)

When the Grand Councilwoman declares that Lilo and Nani are to be the caretakers of Stitch during his exile on Earth, she also implies that Cobra is not to divide the family, but to protect them instead.

If the end of the film is any indication, Cobra appears to have become a close friend to the family. He is seen helping the family rebuild their house, attending one of Lilo's birthday parties and also appears in two of Lilo's photographs. In one photo, he is seen watching a movie with Lilo, Stitch, Jumba and Pleakley. In another, he is seen serving Lilo's family a turkey at a Thanksgiving dinner.

When Jumba was kidnapped and held hostage by intergalactic criminal Dr. Hämsterviel, Cobra was called over by Pleakley and Nani to help figure out a way to save him. Hämsterviel demanded the other 625 experiments in exchange for letting Jumba go. Cobra reluctantly does so, but Lilo and Stitch fortunately retrieve the experiments, putting Hämsterviel under arrest.

Cobra didn't appear much in the TV series, but he did appear in a few episodes.

In "Spooky", an experiment that can morph into others' worst fears turns into Cobra and tricks Nani into thinking he's taking Lilo away.

In "Amnesio", Cobra was seen at the end with the other major characters celebrating Lilo's birthday.

In "The Asteroid", Cobra was visiting an observatory to speak with a scientist about any possible solution to the destruction of an oncoming asteroid. Later on, when all hope seems lost for Earth, Cobra heads over to Nani's house to warn her and the family about the problem since they have access to a spaceship. However, Lilo and her alien friends take off in Jumba's ship with the intent of stopping the asteroid. After successfully using the spaceship's hyperdrive to send the asteroid away, Cobra tells Lilo and Stitch that though the U.S. government cannot publicly acknowledge these events, but he does pass them a congratulatory letter from the president himself.

In "Shush", Lilo gave an experiment that can eavesdrop on others' conversations to Cobra for CIA-related use.

Cobra is briefly heard over the phone when Lilo called in an attempt to get in contact with Stitch who was in space at the moment.

Cobra makes his first new appearance in years in this series. He is first seen in the second episode "Teacher's Pet", where it is revealed that he is in China observing Stitch (who has found a new family with local girl Wang Ai Ling) from a distance along with a fellow CIA agent, relaying information to the Grand Councilwoman. In "Nuo Opera" it is revealed Cobra has been monitoring Jumba and the creation of his new genetic experiments. He observes Stitch initiating the creation of eight experiments Jumba had been planning and consults the Grand Councilwoman, who decides the Galactic Federation needs to intervene. As the experiments wreak more and more havoc around town, the more urgent Cobra and the Grand Councilwoman take the situation. However, once Cobra sees that the new experiments (and Stitch) are behaving, he tells the Galactic Federation to stand down. 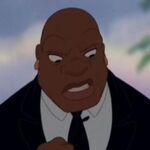